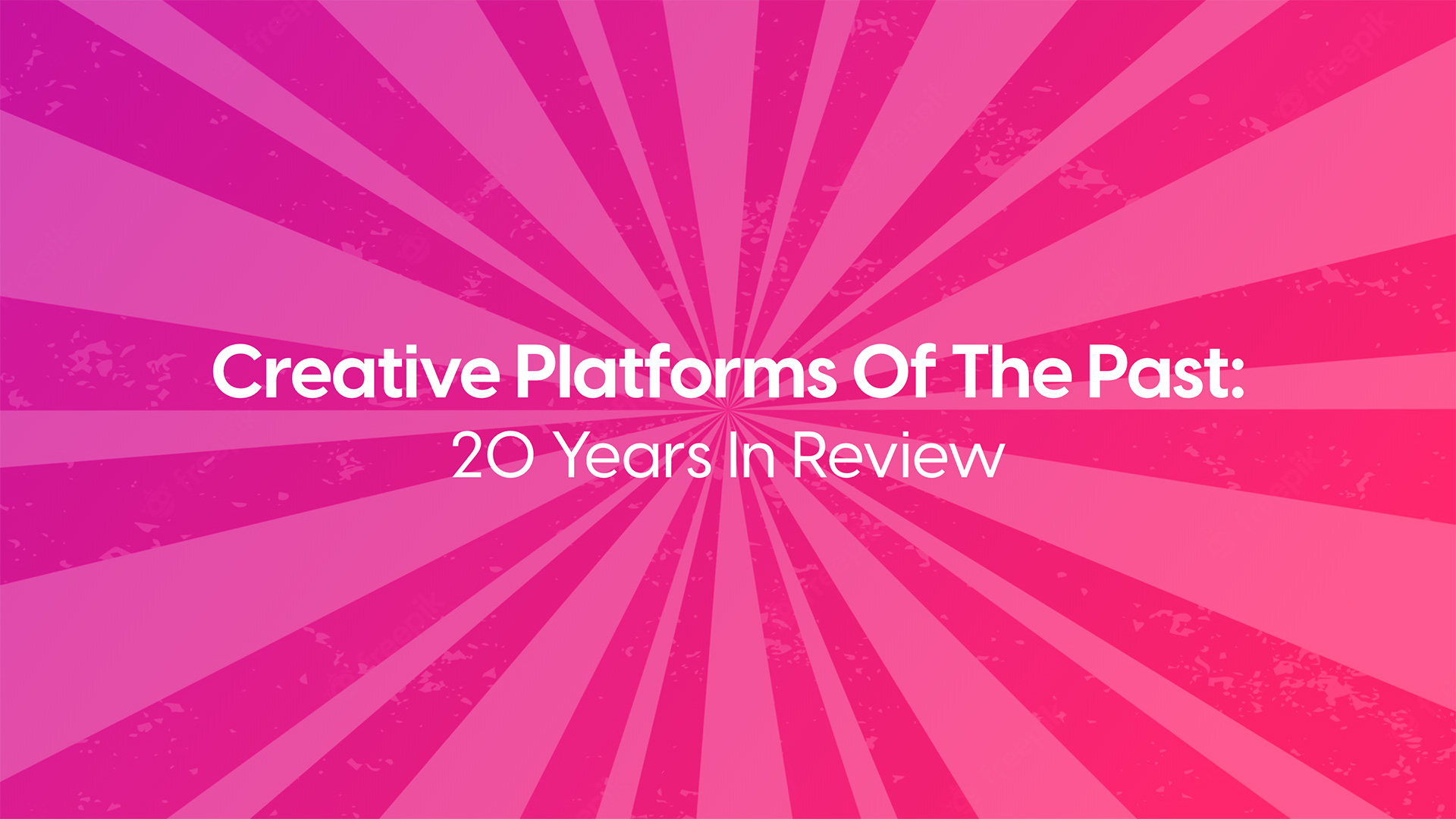 Creative Platforms Of The Past: 20 Years In Review

Creative platforms of the past have come a long way to become the automated, feature-rich versions content creators know today.

A little over 20 years ago marks the 2000 dot-com market crash in the technology industry. Many companies collapsed with this crash, while others like Amazon and eBay managed to cling on and grow. Between the two extremes, companies had to innovate and reinvent themselves to stay competitive—and some of these evolutions directly impacted the creative tools digital content creators used.

In this article, we focus on creative professionals within the tech industry and take a closer look at how companies had to revamp their platforms to push through the challenging and competitive economy of the past 20 years.

When “Influencers” Were Humble Vloggers

If you think about the content creation landscape today, you probably think of TikTok videos, Instagram reels, memes, and bite-sized videos. However, back in the early 2000s, many popular internet stars were creating content just to express themselves and their own creativity.

While the Bo Burnham of 2021 created a Netflix sensation with his one-man comedy special, Inside, the creator was making much more lo-fi comedy songs and vlogs for YouTube back in 2006. The tools he was using were much more primitive as well, likely filming and editing videos on his iMac using iMovie and his webcam. Today, he has access to powerful editing suites like Adobe Premiere or Final Cut Pro.

Another popular tool for content creation in the early 2000s was Macromedia Flash, which was later acquired by Adobe. Flash was a web-based player that could be used to design and deploy online applications, small games, and, most importantly, animated video.

While many creative departments latched on to Flash as a way of creating interactive and engaging content for corporate websites, more homespun creatives were creating wildly popular websites like Homestar Runner, which, in part, defined an internet aesthetic upon release in 2000. According to an oral history on the animated web series from Gizmodo, creator Mike Chapman dropped out of graduate school to learn Flash. “We had Flash tutorial books and I dropped out of grad school for photography and was like, ‘I gotta learn this web design stuff man! I mean, it’s on the web!’”

Not all of these tools have stayed the course when it comes to the creative platforms current content creators, marketers, and storytellers are using. On the other hand, the sort of accessibility pioneered by platforms like Macromedia Flash—able to be learned about in tutorial books and videos—has remained.

In the early 2000s, companies were of a survival mindset until the economy recovered. It took a few more years than most expected, and it was beginning to look like the glory days of the dot-com era were never coming back.

For creative professionals, the most important thing to focus on was keeping their current clients and customers happy while exploring new ways to secure business. Many found the creative technologies they’d grown to rely on evolving in ways that did (and didn’t) help them.

Adobe quickly learned to focus on making platforms more accessible to the average person. This was evident when Adobe acquired Macromedia for $3.4 billion in 2005. According to The New York Times, this deal posed a substantial risk to Adobe. Even so, the acquisition made sense from a product standpoint to encourage consumers to use PDF by streamlining access to just one platform.

Adobe also recognized the barrier of entry to its programs that required extensive training and practice, such as Photoshop, Illustrator, and InDesign. To make the features of these programs more accessible, the company launched Adobe Creative Cloud, which simplified the creative design process with user-friendly templates and interfaces—not to mention more frequent updates and feature releases.

Prior to Adobe Creative Cloud, users would be stuck waiting for a new major release of the programs they counted on. The difference between Adobe After Effects 6.5 and Adobe After Effects 7 could sometimes be huge, with timewarp effects and better integration with Adobe Premiere via dynamic link proving to be major benefits for streamlined content creation.

In addition to accessibility, users voiced a need for more intelligent features. The creative platforms of the past weren’t cutting it anymore. For example, according to CreativePro, it was becoming more common for consumers to ask companies to produce an intelligent program that could accurately map styles in templates without laborious input from the user.

These sorts of features are commonly seen in current apps like Canva, Adobe Spark, and AdCreative.ai, which put users in the driver’s seat with simple interfaces that produce great results with little to no input other than a few branding colors.

With the growth of automation, some argued that advanced creative platforms and smart technology impaired cognitive skills through shortcuts and distraction. Although there was some resistance to automation and AI driving the creative platforms of the past, the cheers greatly outweighed the criticism.

Why The Critics Were Wrong

Growth and development of the creative platforms of the past have far more benefits than negative attributes. Creative intelligence has become essential to helping businesses scale and connect better with their audiences. Look no further than the content-aware fill tools offered by Adobe Photoshop and Adobe After Effects to see how AI-powered tools are changing the game for content creators.

Rather than destroy our ability to multitask, smart technology and AI have made it possible to free ourselves from menial tasks, thereby opening space in our heads for higher pursuits. AI-based technology integrates machine learning and deep learning to accelerate processes and help businesses focus on higher-level decisions. As a creative, you shouldn’t have to resize and re-layout the same ad for five different social media formats. Your time is better used focusing on creating compelling ad creative and graphical design; not spending an hour cropping different file sizes.

These advances go beyond content creation to ad buys for digital platforms like Google Ads and the like. With the digital revolution, information and data are not only available, they are readily accessible to just about anyone.

When analyzing consumer insights and market trends, the human mind is limited by time. AI, however, makes it possible to lean on thousands of data points that lead to better business decisions in minutes or even seconds. The next time you’re creating an ad on Facebook and getting to the nitty-gritty interests-based data, thank AI for making this process smooth, simple, and fast.

Today’s creative platforms listen, learn, and adapt to changing trends. Leveraging this technology has benefitted businesses and consumers by helping them connect on a more personal level so companies can provide precisely what the end-user wants.

What’s Next For Advertisers?

Creative platforms of the past laid the groundwork for businesses to scale while generating eye-catching content. Integrating automation and AI lets more of us do it, and at a faster pace than ever before.

But although creative platforms have come a long way, many businesses don’t take advantage of the benefits of AI and automation. If companies wish to remain competitive, the time is fast approaching when they cannot compete.

AI has proliferated and continues to trend toward being the future of all industries. It is essential to stay competitive, or you’re sure to get left behind!

The AdCreative.ai platform automates creative advertising, analyzing information faster and more accurately than a giant team of marketing professionals ever could. Marketing campaigns are becoming more complex and personalized; alongside that, consumer expectations continue to grow.

We are confident that AdCreative.ai will help take your business to the next level so you can stay ahead of the curve.

Say goodbye to the creative platforms of the past, and take advantage of a free trial of AdCreative.ai today!

Register now with one of the best creative ad automation tools.