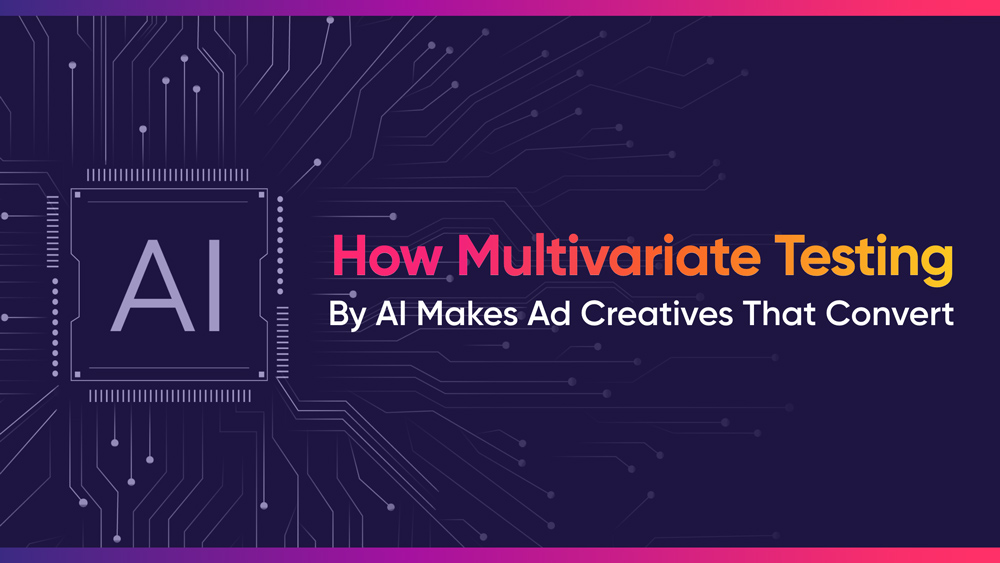 How Multivariate Testing By AI Makes Ad Creatives That Convert

If you want to generate business, you need to create display ads and social media campaigns. Regardless of whether you’re a B2C retail company or B2B SaaS business, it can take as many as 13 touch points before a buyer actually converts. In practice, that means you need engaging ad creative—and a lot of it.

At the same time, most marketers and ad agencies have become data-obsessed. Leveraging actual performance metrics can be incredibly helpful when it comes to optimizing your ads to put your best foot forward. Data-driven insights are often gleaned from various testing methodologies. A/B testing has long been the bread and butter of marketers’ data and for ad teams looking to optimize their ads. In recent years, though, machine learning tools have enabled agencies and marketers to go beyond A/B testing solutions with multivariate testing in dynamic new ways.

When it comes to crafting ad creative at scale, artificial intelligence tools play an important role in your martech stack. But did you know that AI also has its place in the world of testing? After all, it’s not enough to just have a variety of ad elements; you need to also have ad creative that leads to sales.

Especially if you’re trying to do this work in multiple regions, markets, or ad accounts, it can take a lot of leg work to get it right. That’s where AI comes in.

Learn the ins and outs of multivariate testing—and AI’s critical role in the process—in this article.

What Is Multivariate Testing?

In a nutshell, multivariate testing is a form of ad testing where multiple interchangeable elements of an advertisement are tested. For example, if you’re creating a Facebook ad, you may have a few different elements that you want to test for performance. These might include a headline, a call to action, an image or video, and a description or post copy.

When conducting multivariate testing, you run a series of slightly different ads against each other in order to learn what is performing best. You may have four different headlines, two calls to action, and six images to test, and each of these carries with it a variety of combinations and permutations. Four headlines, two CTAs, and six images can generate a total of 48 unique ads, some of which may be top-performers and others of which may be a complete waste of time.

That sounds complicated, but only because it involves a lot of different numbers. In practice, multivariate testing allows you to automate and streamline ad creation and really get to the bottom of why a particular advertisement is performing well.

Is it the call to action, the headline, or a specific headline combined with a particular image that resonates most with consumers? Multivariate testing gets to the bottom of this by giving you more granular detail on why specific ads perform better than others.

How Is Multivariate Testing Different Than A/B Testing?

In A/B testing, you run two different ads head-to-head. While that can offer you a chance to use the better-performing advertisement in your campaign, just because one ad beat another doesn’t mean it’s the highest-performing ad creative you could have used.

For example, if you’ve created an ad with two different calls to action, you may think your customers are responding more to the language “Shop Now” than “Buy Now.” While that can give you some helpful insight, there’s a lot of inference involved in that one decision. In reality, different imagery could have performed even better with the CTA “Buy Now,” but you would never know that if you were focused on A/B testing.

While A/B testing is better than no testing, when it comes to both breadth and depth, multivariate testing blows A/B testing out of the water. When you’re using multivariate testing instead of A/B testing, you’ll be able to really get to the bottom of which variables are the reason an ad did well or poorly. You can further iterate upon those advertisement elements, creating ads that perform better and better with your audience.

What Are The Benefits Of Multivariate Testing?

Many times, multivariate testing offers insights you would never have even thought of, simply due to the fact that you’d never spend time manually building so many different versions of an ad. Ad features like your logo being white or in color, or featuring a red background instead of a blue background may seem like small changes, but they can have a big impact on ad performance. By opening up a wider swath of variables to test in your ads, multivariate testing can serve as a shortcut to high-performing ads without spending weeks dragging through a complex iteration process.

Multivariate testing also lets you leverage automation and machine learning to create more powerful ads more quickly. In our earlier example with 48 unique ad permutations, it’s clear that producing that many ads for a single campaign in a week would take a lot of work hours. Multivariate testing with AI does this work quickly so that your designers and ad execs can free up their schedules to focus on more pressing tasks.

Obviously, making dozens or hundreds of variations of an ad can be a tedious process. This is where platforms like AdCreative.ai, powered by machine learning, come to the rescue. With AdCreative.ai, you can quickly generate hundreds of different ad creatives in just a few clicks. This makes it easier than ever to automate your ad creation and build better-performing ads. Since AdCreative.ai is already focused on conversion when generating ad creatives, it’s a natural fit for multivariate testing campaigns.

In just six steps, AdCreative.ai streamlines the creation of hundreds of creative elements for your advertisements. Simply start by uploading your logo, setting your brand colors, and adding text, images, and backgrounds. From there, AdCreative.ai does its magic and gives you a cornucopia of ad creatives to leverage as you multivariate test.

Once you’ve found something that seems to perform well, it’s easy to continue to iterate, building upon the insights you’ve gained. This leads to faster creation times, meaning that you’ll get a higher volume of top-performing content in less time than it would take to do things manually. That’s a huge win regardless of the size of your company.

With AdCreative.ai, you can generate up to 10,000 ad creatives per month. This means that the sky’s the limit when it comes to creating tons of permutations of ad elements for your testing purposes. Particularly if you’re looking to rapidly deploy a variety of combinations of ad creative, AdCreative.ai is an indispensable tool to leverage.

Even if you can automate the creation of your ad creative, manually uploading different versions of ads takes forever. AdCreative.ai seamlessly integrates with advertising platforms like Google, Facebook, ADYOUNEED, and Zapier.

When you’re trusting an AI platform with your ads, you need to make sure you’re putting your faith in one worth its salt. AdCreative.ai’s machine learning algorithm is updated daily and is constantly learning. Any time you create new creative, you’re using the most up-to-date insights about what will lead to conversions.

Designed With Collaborators In Mind

Although AdCreative.ai is just as useful for a team of one, it’s also been designed with an eye toward collaboration. Have up to 25 different users under one account. This is ideal for agencies and startups, as well as e-commerce businesses.

Take AdCreative.ai For A Spin

Ready to see how the creative intelligence offered by AdCreative.ai can take you from A/B testing to multivariate testing in no time at all? It might seem daunting, but with the right tools, it’s easy to get started creating ads that convert better and take much less time to make.

Sign up for a free demo and see for yourself just how simple, straightforward, and effective multivariate testing can be.